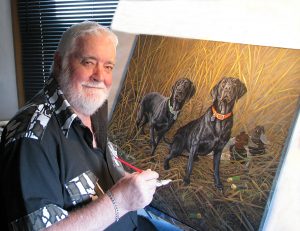 Terry, a nationally know wildlife artist, has won over thirty major awards since 1988. He was the first Wisconsin artist to win the Waterfowl, Pheasant and Turkey Stamp Designs in the same year, and has placed second in the Federal Dick Stamp Design. His recent awards include the 2016 Wisconsin Waterfowl and Pheasant Stamps, as well as the 2016 Channel 10 Artist.

His paintings are included in many corporate, public and private art collections.

This is an enviable record for a self-taught artist whose passion is being out in the wilderness in search of game and inspiration.

Terry’s interest in art was kindled as soon as he could pick up a pencil, continually stimulated by an encouraging father and the subsequent talent polished as an art student. He was an artist for the Navy while serving aboard the Intrepid, an aircraft carrier, from 1960 through 1963.

He finds his work an endless inspiration. “Every once in a while you put out a really spectacular piece where everything comes together. But an artist is the same as a musician, he never stops learning. Always learning some little brush stroke or use of light that will make your next painting easier to do. It’s a learning process that keeps going, never ending.” Terry lives his art. An avid fisherman and hunter, he does not separate the outdoor experience from his work. Instead, he continues the experience on canvas.

A visitor to Terry’s studio will not only visually devour the paintings placed before him, but fight a nagging envy instilled by the knowledge that a person can actually do what he does. He can capture a piece of northern Wisconsin terrain, a muskie leaping out of the water, or a whitetail along a cut cornfield and bring home so much that you’ll suddenly and naturally long for your favorite spot in the northwoods.

In addition to the quality of his art and major awards, his professional diversity and community contributions are equally as impressive. Over the years his donations of original paintings and limited edition prints have helped support conservation groups as well as private individuals in need. 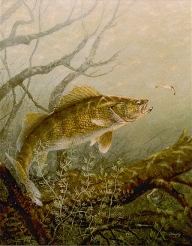